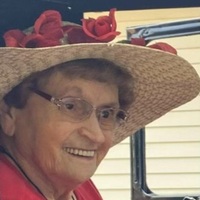 Anna Lillian Prindle, 96 went peacefully to meet her Lord on August 1, 2022.  Lillian was born on March 4, 1926 in Cascade, Nebraska northwest of Purdum.  Her parents were John and Nelda Keller who homesteaded in the Cascade area.

She was married to Glen Nutter in 1943 and lived in Crawford, Nebraska during WWII before settling on a ranch northeast of Thedford.  Children Linda and Joe were born to this marriage.    Lillian said the birth of her children was the greatest joy in her life.

Married to Clifford Prindle in 1964 she openly welcomed stepson Bert Prindle (Dee) of Dixon, Wyoming who called her his Mom.

Lillian graduated High School from the Nebraska School of Agriculture at Curtis in 1943.  Her road to getting her education was sometimes difficult.  She and her siblings rode horseback or in a horse-drawn buggy built by her brothers to the school house that was three and a half miles from their home.  In the fifth grade she followed her siblings to school in Dunning where they stayed all week.  After the school burned down her eighth-grade year her parents boarded the teacher who taught Lillian.  Of all the students in Cherry County she ranked fourth in highest academic honors.  When she attended school in Curtis, she was only able to come home at Christmas and summer months.

For twenty-six years Lillian was employed at the bank in Thedford.  She saw it as the Citizen State Bank, Abbott Bank and Security First Bank.

Her greatest accomplishment was being called to be a Stephen’s Ministry teacher.  This program teaches lay people in the congregation to minister to those dealing with difficult circumstances in their lives.  As a long-time member of the United Church of Christ she held most of the leadership positions over the years.

She was instrumental in developing the Thomas County Historical Society in Thedford and worked tirelessly in collecting artifacts for the Museum.

Lillian was the oldest member of TOPS (Taking Off Pounds Sensibly) support group and was founder of the area Chapter in 1974.

In lieu of flowers contributions in her memory can be made to United Church of Christ or Hillcrest Cemetery.

Linda, Joe and families wish to thank the Thomas County Community for the care and love they have shown to their Mother over the years helping her to live independently in her beloved Sandhills just a little bit longer.

Funeral services will be held on Saturday, August 6, 2022, at 11:00 AM at the United Church of Christ in Thedford with Pastor Les Parmenter officiating.  A visitation will be held on Saturday morning 9:00 AM until service time at the church.  The funeral will be live stream on the Thomas County Parish Facebook page. Govier Brothers Mortuary is in charge of the arrangements.  Online condolences may be left at www.govierbrothers.com.