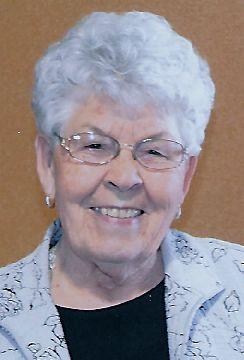 Eloise (Karn) Kramer, 89, passed away, June 20, 2020, in North Platte, NE. Eloise was born March 14, 1931, to Nicholas and Elizabeth (Millen) Karn and grew up on a farm southwest of Stapleton, NE. On May 22, 1951 she married Wayne Charles Kramer. They lived in Stapleton for a brief time and the following year moved to the Kramer ranch, 17 miles northwest of Stapleton. To this union were born seven children.
Eloise graduated from Stapleton Public School with the class of 1949. After graduating high school, she worked at Gambles Hardware and Appliance Store in North Platte, and for the county agent in the Logan County Courthouse.
Most important to Eloise was her Catholic faith and her family. She was deeply involved at St. John the Evangelist Catholic Church in Stapleton where she was the church organist. She played for well over 100 funerals and countless weddings. She mentored and accompanied numerous young people who sang for weekend services. During her first years as organist, she used a pump organ until there was electricity in the church. She also shared her faith by teaching catechism to the youth of the parish from 1965-2010. She was an officer in the Altar Society for many years.
Eloise was an excellent seamstress and used her talent to make banners for the sanctuary of the church, clerical stoles for the priests and patches for the knees of western jeans.
National and international travel was of great interest to Eloise. Some of her travels included visits to see her family on the coasts. She traveled with her daughter Monica to Germany, the land of her ancestors. They also visited the Vatican in Rome, Italy. She traveled to Ireland and Scotland with her son Jerome. She also traveled with friends on cruises to Alaska and Nova Scotia.
Eloise’s children and grandchildren were the recipients of wonderful home-cooked meals. She was recognized by the North Platte Telegraph as Cook of the Week. Her signature items were lasagna, coconut pie and popcorn cakes. One of her great joys in later years was eating and visiting with her friends at the Senior Center in Stapleton, where she served on the board for several years.
Eloise valued education and she completed a graduate-level course at the University of Nebraska at Kearney in her later years. She was pleased with her accomplishment.
After her husband Wayne died on April 21, 1998, Eloise stayed on the ranch until 2000 when she moved to Stapleton into the remodeled home where her parents had lived prior to their deaths. She attended daily masses as often as possible. She prayed for the physical and spiritual well-being of her children daily and unceasingly. The last years of her life she lived at Linden Court in North Platte.
Preceding her in death were her parents, her husband, two infant children, Anthony Wayne on August 30, 1954 and Cecilia Marie on September 3, 1965, a sister Joan (Lyle) Biggerstaff, a brother Lawrence “Pete” (Maureen) Karn, a daughter-in-law Pat Benson Kramer, and a son-in-law Randy Kramer. She is survived by her brother Bill (Zola) Karn of Stapleton, sisters-in-law Sharon Kyne, Phyllis Churchill, Janell Woracek, Jean (Ken) Seib, Nadine (Jim) Kraus.
Eloise is also survived by her children and 17 grandchildren: Christine and Bud Harvey, their children Aaron, Kelli and Ryan. Monica Kramer, her children Moriah, Nathan and Joshua. Kathleen Kramer, Lemoyne Dailey, their children Jeremiah, Emily, Kaman, Seth and Andrew. Matthew and Kim Kramer, their children Ashley, Adam, Brenna, Brittany. Jerome and Connie Kramer, his children Courtney and Zach. In addition, she is survived by numerous great-grandchildren.
A Christian wake service was held Wednesday, June 24 at St. John’s Catholic Church, Stapleton, NE. Mass of Christian Burial was held on Thursday, June 25, at St. John’s Catholic Cemetery, located 1 mile east and 1 mile south of Stapleton with Rev. Thomas Gudipalli as celebrant, and Rev. Mark Seiker and Rev. Jim Heithoff as concelebrants. A memorial has been established to St. John’s Catholic Church in Stapleton.
Adams & Swanson Funeral Home was in charge of arrangements.