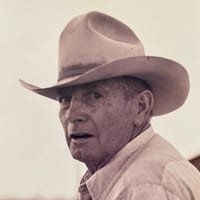 Gaylord “Tom” Eberle passed away November 18th, 2020 at the Community Health Center in Burwell, Nebraska. Tom was born on March 8th, 1934 to Roy Eberle and Cleone “Mentzer” Eberle near Burwell, Nebraska. He attended country schools in the rural Burwell and Oconto areas.

When Tom’s family moved to Broken Bow, he attended Broken Bow High School and he graduated with the class of 1951. Tom enlisted into the Army in 1951 and he was an armor crewman of a tank crew at Fort Hood, Texas. He had attained the rank of Corporal before being honorably discharged in October of 1954. While he was in the army, he was on the boxing team at Fort Hood with a record of 20-1 and after that loss he decided to hang up his gloves except when playing around with his boys. Tom married Kathleen Peltzer in December 1954. They made their home in Broken Bow, Nebraska and to this union 4 children were born, Karen, Jim, Joe, and Kristi.

Tom began his working career driving a truck for the Eberle family trucking business. Tom and his brother  Jerry formed a partnership known as Eberle Brothers Quarter Horses. Tom became a shareholder with his brother Jerry, Dean Briggs, and Ronald Woodward in the Central Nebraska Commission Co. Sale Barn from 1968 to 1978. Tom then worked as a field man for the Sale Barn from 1988 through 2002. Tom enjoyed traveling the area looking at cattle and visiting with livestock producers. Tom loved horses and over the years bought and sold hundreds. He was involved in many horse sales and had several of his own horse sales around the country, including Iowa, Kansas, and Nebraska

Tom was a member of the Valley View Riding Club as a flag bearer. He was involved in creating the Central Nebraska Rodeo Association and served as a director for a number of years. Tom enjoyed being Involved with his children’s 4-H horse projects and was a leader of the Sunset Riders Club for 10 years. Tom had a large riding arena where he hosted numerous amateur calf roping and ruff stock competitions.

In 1987 Tom married Patty (Govier} Pelster, they were married for 32 years. Tom and Pat made their home in Broken and in their retirement, years moved to an acreage on the edge of Broken Bow. Tom finished his work career as a pen rider from November 2003 to February 2007 at Adams Land & Cattle Co. Most of you know pen riding ls a tough job for a younger cowboy, Tom did the job in his 70’s.