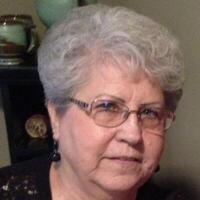 Genie attended school and graduated from McPherson County High School with the class of 1955.  She worked for her aunt Myrtle at the local café.  Genie was married to Victor Allen on May 4, 1957.  To this union three children were born, Randy, Kevin and Kim.  The couple moved to California where Genie was a stay-at-home mom.  In 1978 they moved back to Stapleton, NE., where they owned and operated Allen’s Ark, a restaurant and motel.   Then in 1993 they moved to Arnold, NE., where they owned and operated the local restaurant the Model Café.  The couple retired from the restaurant business and Vic passed away in 2005. They both will be remembered for their wonderful homecooked meals and Genie’s spectacular desserts, pies and salads.  On February 8, 2007, in Benson, AZ., Genie married Jim Warner.  Jim proceeded her in death in 2019.  She loved bowling and was a member of bowling leagues in California and North Platte.  She participated several state and national bowling tournaments.  She also enjoyed going to dances, listening to music and playing cards with friends.  To her family and friends Genie will always be remembered as a wonderful wife, mother and grandmother.

She is preceded in death by her parents, George and Hazel Wade; brother, Fred Wade; and three infant siblings.

Memorials are suggested to the Gift of Hope Cancer Foundation.

Funeral services will be held at 11:00 A.M, Saturday, March 5, 2022 at Adams & Swanson Funeral Home with Rev. Mitch Ivey officiating.  A reception will immediately follow the service at the Moose Lodge, 1315 E. 4th St., North Platte.  After the reception, inurnment will be at Miller Cemetery, Tryon, NE.    Visitation will be noon to 5:00 P.M., Friday, March 4, 2022, with the family present to receive friends from 3 – 5, at Adams & Swanson Funeral Home.