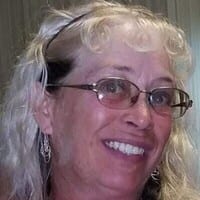 Ginger graduated from McPherson County High School in 1985.  She then went on to Grand Island Business School in 1987 and graduated with a bachelor’s degree.  On June 3, 2015 Ginger married Tory Smith and they combined their families with six children, Elizabeth, Jessy, Tyler, Amanda, Ray and Andy.

Ginger enjoyed fishing and always caught more than her husband.  She loved family camping trips and canoeing.  Ginger had an infectious laugh and always kept a positive attitude.  Those that knew her could locate her anywhere with her laugh.  She was a mother hen that took care of everyone in her life.  She made great omelets and delicious pies.

Ginger was a long-time member of the Eagle’s and the Eagle’s were a second family to her.  She was elected “Mother of The Year” at the Eagle’s in 2015.  Ginger owned and operated a lawn care business and took great pride in her customer’s lawns.

She was preceded in death by a son, Tyler Daigger; grandparents, Ted and Helen Daigger Sr. and Betty and Jim Winder.

Memorials are suggested to Red Cross. Online condolences may be shared at www.adamsswanson.com

Mass of Christian burial was celebrated Monday, January 25, 2021 at St. Patrick’s Catholic Church with Rev. Bryan Ernest as celebrant.  Inurnment was in the North Platte Cemetery.

Adams & Swanson Funeral Home was in charge of arrangements