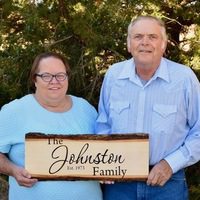 Harry Kenneth Johnston was born January 14, 1952 in Arnold, NE to Harry and Naomi (Dishman) Johnston.  He was the oldest of three children.  Known by Ken or Kenny, he attended grade school at Hawley Flats District #3, and graduated from Brewster High School in 1970.  When Ken was young, he enjoyed fixing fence with his father, playing with toy trucks, fixing cars, and taking care of his vehicles.  MaLinda Sue (Zimmerman) Johnston was born in Broken Bow, NE to Dale and DeLilah (Saner) Zimmerman on January 4, 1955.  She was born 6 minutes after arriving at the hospital.  Known by Sue, she was the second of five children. Sue attended grade school at Hoosier Valley near Anselmo, NE until 3rd grade, and finished at Halsey-Dunning Elementary.  In her younger years, she enjoyed playing outside, riding horses, and helping in the hayfield sweeping hay at the ranch outside of Dunning, NE. She graduated from Sandhills High School in 1973.  After graduating from high school Ken worked at Bowen’s Mobil Station in Dunning, NE, and Dan Norris’ machine shop in Brewster, NE.  Ken and Sue began dating in June 1972, while Sue was still in high school.  After graduation Sue worked as a seamstress in Grand Island for a short time. Ken & Sue were united in marriage on October 28, 1973 at the Seventh-day Adventist church in Broken Bow, NE.  The couple resided in Ainsworth, NE after getting married and Ken worked for Dude Daniels Manufacturing, driving a semi, and Sue made curlers and provided in-home daycare.  They lived there until 1979, when they moved their family to Brewster, NE and opened Johnston Repair, providing general mechanic work, welding, and feed, for the next 42 years. Ken took automotive courses, and received his Master Automotive Technician certificate in 1981. Ken was able to fix most anything, and was an excellent welder. He was known for building/welding many things including buildings, auto-gates, front steps, metal windmills, and signs. He was extremely involved in the community including being the fire chief, ambulance driver, on the cemetery board, and was the village clerk.  Sue worked at the Nebraska National Forest at Halsey in the tree nursery.  Her 27-year career with Sandhills Public Schools began as the janitor at the Brewster Elementary.  After completing her culinary courses, she became the cook in Brewster, and continued on to Halsey, and then became the head cook at Dunning.  During the summer months she cooked at the Nebraska State 4-H camp.  After retiring, she helped her husband with their business, Johnston Repair.  Sue was active in the church, and volunteered at the ‘Community Connection’ thrift store.  Ken and Sue were both proud of their community, and were awarded the Community Service Award in 2002 and 2015. Ken and Sue were loved by their six grandchildren, who remember Papa J with M&Ms and a soda pop at his shop, and Ma J as always having a cookie and cinnamon roll at her home.  Sue passed away on October 16th of 2021, and Ken passed away on October 18th of 2021 and both will be dearly missed by all who knew and loved them. Ken and Sue are survived by their four children – Tessia Johnston (Duke Finck) of Rapid City, SD, Trisha (Marty) Christensen of Mead, NE, Wyatt (Yolanda) Johnston of Brandon, SD, and Teri Johnston of Omaha, NE. Their grandchildren – Mason, Micah, and Kathryn Christensen, and Harley, Penelope, and Sutton Johnston.  Survivors also include Ken’s siblings – Karen Fay and Kay (Dan) Schenck, and Sue’s siblings – Belinda (Tim) Tibbs, Dail Anne (Ricky) Helzer, Leon (Debbie) Zimmerman, and Lynn (Janet) Zimmerman.  They were preceded in death by Ken’s infant brother Kody, Ken’s parents Harry & Naomi Johnston, Sue’s parents Dale & DeLilah Zimmerman, and brother-in-law Max Fay.

Online condolences may be left at www.govierbrothers.com  Memorials are suggested to the Brewster Fire Department or the Brewster Community Center.