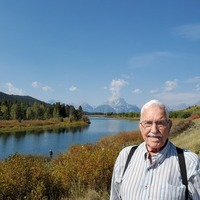 Harvey grew up on the family farm south of North Platte with his two brothers.  He attended Huebner School through eighth grade and graduated from high school at the Nebraska School of Agriculture in Curtis, NE, in April of 1949. Harvey married Marilyn Elaine Graham on June 10, 1951, in Hershey, NE.  He enlisted in the Army in 1953 and served until 1955.  In 1960 Harvey and his family moved to Stapleton, NE, to join his brother in a farming and ranching operation.  His life changed in 1975 when he trusted Jesus Christ as his Savior.  Harvey and Marilyn moved to Gothenburg in 1985 when they purchased and operated the Daylight Donut Shop.  In 2000 they retired and moved back to North Platte where Harvey lived until entering the nursing home in June of 2022.  Harvey was actively involved at Bethel E-Free Church in North Platte, NE, for more than 20 years.

Funeral services will be held at Bethel E-Free Church in North Platte, NE, Friday, August 5, at 10 a.m. Interment will follow at Fort McPherson National Cemetery at 1:00 p.m.  Viewing will be from noon-7:00 p.m. with visitation with family from 5:00 -7:00 pm at Adams and Swanson Funeral Home in North Platte, NE, Thursday, August 4.  Adams and Swanson Funeral Home is in charge of arrangements.

For those who are unable to attend in person the service will be livestreamed www.adamsswanson.com.