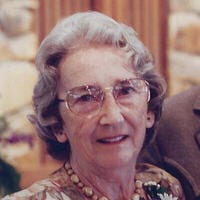 She was born on April 25, 1932, at Sutherland, NE to Herbert A. and Elizabeth E. (Fairchild) Leach. The family moved to a ranch near Hershey when the Sutherland Reservoir took their land.  She attended school at District #122 and graduated from N.S.A. in Curtis, NE in 1948. She attended Business college in North Platte, NE. She worked at W.J. O’Connor’s and Memorial Hospital in North Platte, NE.

Jenevie was united in marriage to Delbert E. Tobey on February 28, 1954, in North Platte at the Methodist Church. They were blessed with four children, Dallas, Ronald, Delores and Rollin. Together, they worked the land and raised purebred Angus cattle for many years. In later years she enjoyed traveling and seeing what others were doing in agriculture. They took their motorhome to country music festivals and antique tractor and machinery shows, where they made many friends and memories.

She was a member of W.I.F.E. and the Sunshine extension club. Her hobbies were gardening, butterflies, and taking classes at Mid Plains Community College to learn upholstering and computer applications.