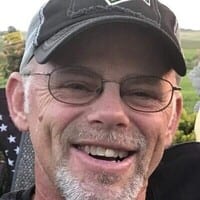 Memorial services will be held on Friday, March 26, 2021 at 10:30 AM at the Callaway Community Church with Pastor Dean Haidle officiating.  Memorials are kindly suggested to the family for later designation.  Govier Brothers Mortuary of Broken Bow is assisting the family.  The services will be livestreamed at www.govierbrothers.com and words of encouragement and sympathy may be left at www.govierbrothers.com

John David Rockwell was born on September 30, 1965 at Cape Girardeau, MO to DonLee LaVern and Floy Ann (Leslie) Rockwell.  John and his family moved to Garfield Table Community near Arnold, NE in 1972.  John graduated from Arnold High School in 1984.  During school John participated in football and wrestling.

On July 25, 1987 John was married to Karla Cole at the First Baptist Church in Arnold.  They made their home on the family farm.  John and Karla farmed and did custom haying.  They later started a landscaping business.  For many years they held the church’s annual Easter Pageant on the farm.  In 2018 John and Karla sold the family farm and moved to Callaway to be near their daughter.  In 2019 they designed and built a new home together, with the help of son-in-law Justin.  Moving into it in 2020. John started working for his grandson Jacob, in the True Value store in 2019.

In his short 2 years in Callaway, he was blessed with some very Godly friends, who enriched his life greatly.

John enjoyed motorcycles, horses, and mowing.  The greatest loves in his life were his family and his faith in Jesus Christ.

John is survived by his wife, Karla of Callaway; daughter, Brandy (Justin) Mason of Callaway; grandchildren, Jacob (fiancé Katie Nickerson), Carson, Dawson, and Cruz, of Callaway; his mother, Floy (Curt) Saville of Bella Vista, AR; and a sister, Donna (Steve) Skalak of Lincoln and their children and mother-in-law Betty Cole of Arnold.

He was preceded in death by his father, and two uncles, Randy and David Leslie and father-in-law Doug Cole.