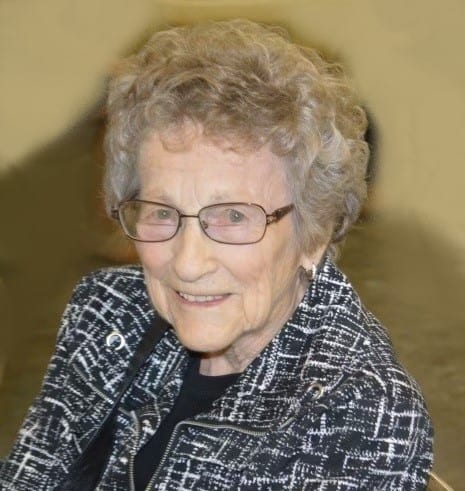 Funeral services will be Tuesday, May 25, 2021 at 3:00 pm at the Baptist Church in Arnold, NE with Pastor Irv Jennings officiating. Burial will be in the Loup Valley Cemetery west of Stapleton, NE. Memorials are suggested to Finch Memorial Library or Loup Valley Cemetery. A visitation will be held on Monday, May 24, 2021 from 5:00 to 7:30 pm at the Baptist Church in Arnold. Govier Brothers Mortuary of Arnold-Broken Bow-Mullen are in charge of arrangements. An online guest book may be signed at www.govierbrothers.com.

Maxine was born on April 5, 1928 in Logan County, to Jesse Dewey Main and Anna Alvirda (Beam) Main.  She was raised on the family farm west of Stapleton.  At the age of ten her mother passed away and she and her siblings were raised by their Dad learning life skills from him.

She attended Nesbit Rural Grade School and graduated from Baker Rural High School in Stapleton with the class of 1945.

On September 28, 1948 she married John Edward Reynolds in Raton, New Mexico.  They had four children, Delma, Beverly, Eddie, and Polly.

They lived south of Stapleton and north of Arnold on the Hagler Ranch for the first years and worked for John’s parents.  They then moved to Dunning and lived on the McGooden Ranch for several years.  When they left there, they moved north of Whitman to the Coble Ranch.  In 1962 they moved to Arnold and purchased the Arnold Motor Court from John’s parents.  Maxine managed the Motor Court for the next 33 years until selling it in 1995.  John and Maxine enjoyed square dancing until his health prevented the activity.

Maxine taught herself to be a talented seamstress, making her family’s clothes, and many pep club uniforms for the years her daughters were in school.  She was a 4-H leader, FHA Chapter Mother, and a member of the American Legion Auxiliary.   She was a faithful member of the First Baptist Church in Arnold.

During her retired years she enjoyed reading and quilting, making sure that each of her children and grandchildren had a quilt and that each great-grandchild had a baby quilt.  She also made her sisters each a quilt and assisted with many at the Church.

In 2013 she moved to Autumn Park in North Platte to be near her sisters.  In 2018 she moved to Linden Estates Assisted Living.

She was preceded in death by her parents, her husband John, her parents-in-law, one brother and two sisters.