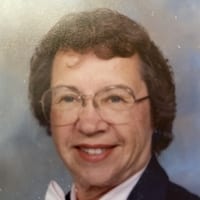 A private Graveside service will be Saturday, March 28, 2020 at the Broken Bow Township Cemetery with Pastor Matt Fowler officiating. A viewing will be held on Friday, March 27, 2020 from 8:00 a.m. to 8:00 p.m. at Govier Brothers Mortuary in Broken Bow, NE. An online register book can be signed for words of encouragement or remembrance at www.govierbrothers. com. Govier Brothers Mortuary will comply with the CDC and State of Nebraska. Govier Brothers Mortuary wants to remind people that no more than 10 people will be allowed in the Funeral Home at one time. We sincerely encourage each person to make your decision whether to attend a viewing based on the best interest of your health and that of your community.

Pauline was born June 26, 1923 in Stapleton, NE to Raleigh and Ruth (Ervin) Reynolds. She attended rural country school in Logan County. Then graduated from Baker Rural High School in Stapleton. After graduation she volunteered at the Canteen in North Platte, NE to feed the military passing through on the train. At one stop she got to see the “Love of Her Life” for 5 minutes.

On November 1, 1942 she was united to that “Love” Elmer Stephens. They made their home in California until Elmer was discharged from the Army, then they moved to Litchfield, NE for three years. To this union two children were born Carol Jean in 1947 and along come Kenneth Wayne in 1950, on “Carol’s birthday!”

In 1948 the couple purchased Stapleton Produce & Feed in Stapleton, NE. They operated this business until 1965 when they sold it and moved to Broken Bow. Pauline worked for Custer Public Power District for approximately 20 years before her retirement. Elmer passed in December of 1986.

On April 18, 1992 she married Steven Haumont in Broken Bow, NE. They both enjoyed retirement and golfing until Steve went to live in Heritage Hall and Pauline moved to Liberty Square. She made many trips down the hall to visit Steve and all the nurses. Most of her free time was spent making quilts, crocheting afghans and name plaques for most of the people at Heritage Hall. In 2016, Pauline entered Heritage Hall herself and lived there until they transferred her to Brookestone View until her passing.

Pauline was preceded in death by her parents, two husbands Elmer Stephens and Steven Haumont, one brother, and four sisters.