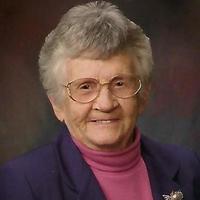 Jack was born on July 31, 1918 in Cope, CO to Jesse Lee and Maria May (Gray) Bandy.   She grew up in Garden County on the family ranch.   On October 26, 1935 in Alliance, NE she married John Robert Cotton in a double wedding with her sister, Thelma, and her husband Billie Gordon.  Bob and Jack lived on the Bandy family ranch and worked for several other ranches before moving to Tryon in 1946.  They started carrying mail in 1946 on a rural mail route of approximately 75 miles, 6 days a week in sun, rain, and snow, and continued that for 33 years    It was there that Jack developed her distaste for snow and cold weather after having to scoop and walk to neighboring houses too many times.   They built the Cotton Café in Tryon in February 1954 and operated it until 1956.    In the Spring, from 1973 to 1988, Jack worked for Huebner’s Garden Center.  It was her dream job allowing her to plant and tend all the plants in the greenhouses.   She developed a lifelong friendship with the Huebner family and credited them with teaching her all she knew about flowers.

Jacks interests were many.  She and Bob traveled many miles camping in tents and campers, one homemade by Bob.  They were in every state in the US, except Alabama, across Canada, into Mexico and the Caribbean islands, and went on several cruises.   Jack always wanted to be on the move even to her last days in her wheelchair.  She loved her flowers and yard and spent many hours in the yard and greenhouse that her son, Bobby, built for her.   In her down time, she seemed to always have needles in her hands either crocheting or knitting.   She made beautiful tablecloths for all her granddaughters as wedding gifts, sweater coats, afghans too numerous to count, and in her later years she made stacks of covered clothes hangers to give away.   Her most unusual interest was digging for and finding antique bottles in abandoned homesteads and dumps.   She and a couple of friends could be found with the dirt flying and an occasional holler of “Look what I found”.    Jack was strong, fiercely independent, needed little material goods, and never complained about her lot in life.   She was a rock in her family.

Memorials are suggested to the McPherson County Fire Department or the Tryon Methodist Church, and online condolences may be shared at www.adamsswanson.com.