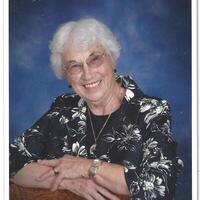 Funeral were held on Tuesday, June 15, 2021, at the United Methodist Church in Arnold with Pastor Bill Williams officiating.  Burial will be in the Arnold Cemetery.  Govier Brothers Mortuary of Arnold is in charge of the arrangements.  Online condolences may also be left at www.govierbrothers.com.  Memorials are suggested to the Arnold Fire and EMT’s.

Patty was born on August 31, 1932, at Arnold, NE to Ferdinand “Fred” and Dora (Seaney) Beshaler.  She attended grade school at Finchville, and later graduated from Arnold High School in 1949.  On October 29, 1950, Patty was married to Cecil “Bud” Parks at Arnold.  They family made their home at Arnold.  Three daughters were born to this union: Deb, Travi, and Binda. Mr. Parks died in 1996.  Patty later married John Nelson. They made their home in Arnold.

Patty continued to make her home in Arnold.  In her spare time, she enjoyed crocheting, reading, and socializing at the local coffee shops in Arnold.  Coffee time was her chance to get caught up on the local happenings, and spending time with her friends.

She was preceded in death by her parents, two husbands, infant siblings Angeline and John, a brother Charles “Bud” Beshaler, and a son-in-law Joe Kramer.