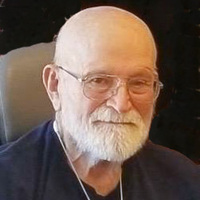 Ralph Harold Eatinger, 82, of Browlee, NE, passed away on May 23, 2022, at Linden Court in North Platte, NE after a brief illness.

Ralph, known as RH to many, was born on July 17, 1939 to Ralph and Norma Eatinger in Broken Bow, NE.  RH was raised on the family ranch south of Brownlee, NE.  Upon graduation from Valentine High School in 1957, he went on to Hastings College.  After a short stint at Hastings College, RH and his parents made a move to Colorado where they spent the decade of the 1960’s, ranching on the western slopes of the Rocky Mountains.  RH had story after story about the experiences of ranching in the mountains.

After selling the Colorado Ranch, RH and his parents moved back to the family ranch.  RH had a knack for machinery, and his role on the ranch was to keep things running and working.  The motto on the ranch was “RH can fix it.”  RH was active on the ranch until a debilitating accident involving the corn chopper in 1987, which finally led to the loss of his leg.

After an extensive rehabilitation, RH began a new role on the ranch, which was “advisor” to keeping things running, gopher, and roadman, which involved purchasing a “really used” road grader…which provided an opportunity for more RH’s expertise.

RH found many other endeavors to fill his days.  One of which, led him to build a traveling smoker and grill.  He gained a reputation for his meat grilling, and began cooking for brandings, trail rides, etc.  RH looked forward to each and every one of these outings because he loved the interaction with the people he met.

RH loved the Sandhills and the history of the people.  Recently, he was referred to as “walking encyclopedia” of the Sandhills.  One of his favorite pastimes was reading, researching, and talking about the Sandhills, and he would welcome the chance to talk to anyone that would listen.

RH served on the boards at the Sandhills Area Foundation, Historical Society in Valentine and Thedford, Thedford Masonic Lodge and was a member of the Shrine and of the UCC Church in Thedford.

RH was preceded in death by his parents, Ralph and Norma, older brother Ramon, infant sister Mary Alice and by special friend of the family, Orville Gallino.

Funeral service for Ralph Eatinger will be held on Friday, May 27, 2022 at 2:00 PM at the United Church of Christ in Thedford.  Burial will follow at the Hill Crest Cemetery in Thedford.  Visitation will be on Thursday, May 26th at 5:00 PM at Sandoz Chapel of the Pines in Valentine.  Mr. Eatinger passed away on May 23 at Linden Court in North Platte.