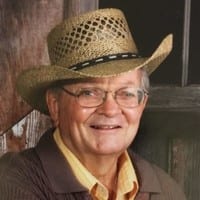 A private graveside service and burial will be Wednesday, April 8, 2020 at the Hillcrest Cemetery in Thedford, NE with Pastor Ron Masten officiating. Memorials are suggested to Glaucoma Research Foundation of San Francisco, CA. An online register book can be signed for words of encouragement or remembrance at www.govierbrothers.com.

Arnold Funeral Home will comply with the CDC and State of Nebraska. Arnold Funeral Home wants to remind people that no more than 10 people will be allowed in the Funeral Home at one time. We sincerely encourage each person to make your decision whether to attend a viewing based on the best interest of your health and that of your community.

Dick was born November 24, 1933 in Omaha, NE to Emil and Pearl (Lundberg) Hoffman. Dick attended and graduated from Sumner High School. He graduated Kearney State College, and then Emporia State where he received his master’s degree. Dick taught Junior High School 7th and 8th grade Social Studies, English, and was a Guidance Counselor. His was an Educator in Thermopolis, WY, Merriman, Hebron, Tri-County in Plymouth, Wilber, Thedford 1974 to 1984, Lyman, and Springview. Dick retired to Thedford.

On August 9, 1959 he was united in marriage to Eileen Wanda Trueman in Sumner, NE, to this union two children were born Cheryl and Mark.

Dick served in the Army during the Korea War. He collected model cars, enjoyed camping, traveling, riding motorcycles, storytelling, and gardening, he had a great sense of humor. After retiring Dick and Eileen wintered in Texas, visiting Mexico, and traveling to Maine, and going into New Brunswick, Canada. Dick was a member of The Thedford American Legion and Lion’s Club.

Dick is preceded in death by his parents Emil and Pearl Hoffman, and wife Eileen.