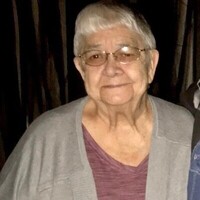 Sara Jane Barnum, 83, a lifelong resident of Stapleton, passed away peacefully at Great Plains Health on May 24, 2022, surrounded by her family.

Sara was born on October 1, 1938 in Arnold, Nebraska, to Harry Albert and Vera Florence (Chesley) Johnson. She was the youngest of 3 children. She was raised in Arnold NE and completed the 8th grade of school.

At the young age of 13, Sara met the love of her life, Ora Lee Barnum, at a dance in Arnold in 1951. They fell in love and were married on October 4th, 1953 at the Presbyterian church in Stapleton. Sara and Ora resided at Ora’s family ranch for 27 years where they raised their 4 children, Donald, David, Darrell, and Donna. In 1980, Sara and Ora bought a house in Stapleton. After moving to town in April of 1981, Sara drove the school bus for Stapleton Public School for 19 years.  Sara started working for the courthouse in Stapleton as a custodian in September of 1982 and worked there for 17 years. In 2000, they built Sara’s Place and ran the cafe until they sold it in 2016. Sara was known for her potato salad; it was the best potato salad around.  She was always up to go to a garage sale, to play bingo or to play some cards. Sara and Ora liked to travel. They traveled to Canada to see friends, they also liked to go to Rose Bud to the casino, and traveled all over to watch their grandchildren and great grandchildren in many different activities.

Online condolences can be shared at www.adamsswanson.com and memorials are encouraged to the Stapleton Fire Department.