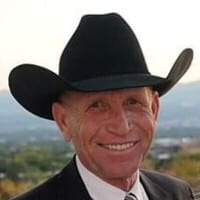 Terry Lee Correll, 62, of Tryon, Ne. took his last breath in his home lovingly surrounded by his immediate family, at 10:30pm on Saturday, September 19, 2020, but was given September 20, 2020 as an official date of death. His body was worn out from a courageous battle with cancer.

Terry was born, December 31, 1957 in Alliance, NE to Lenard “Rusty” Correll and Rita (Dobbins) Correll. He attended Elementary School in Chappell, Ne through 4th grade. The family then moved to Tryon, NE where he attended school at McPherson County through his sophomore year. He finished his junior and senior year at Stapleton Public School, where he graduated with the class of 1976.

He furthered his education by attending Chadron State College where he rodeoed collegiately and professionally, earning his pro-card early on, and winning 2 College Regional Championships. He completed college with a degree in Accounting.

After a period of managing the Crawford, NE sale barn and continuing to rodeo professionally, he moved home from Texas at the height of his rodeo career to help on the family ranch during his father’s illness. Around 1986 Terry partnered with Tom Wiplinger to own and operate T & T Rodeo Company for several years. They held nightly rodeos in North Platte, Ne and supplied stock for high school and amateur rodeos in the area. Fun fact: right before Terry “hung up his chaps” as a pro rodeo competitor, he rode all 3 of the barebacks he drew and won the Stapleton, Arthur and Hyannis rodeos – ending on a winning streak. It was around this time that Terry also “hung his shingle” at Ringgold, Ne as a professional horse trainer where he trained horses in all disciplines and held training clinics, but later on the ranch he would specialize in training cutting horses. He served as an officer for the Western Nebraska Cutting Horse Association and the Cutting Horse Association of Nebraska.

In 1997 Terry met Julie on a blind date, set up through a mutual friend, Dave Kapperman. They quickly discovered they shared the “love of a good horse” and she moved from Lincoln, Ne to the Sandhills, with a teaching job, so they could be together more easily. Terry purchased a ranch at that time where they resided, marrying Julie on June 5, 1999. In the last 20 some years, Terry fulfilled his dreams of training & showing the best horses and raising a family. Anyone who visited with Terry would soon learn that some of his fondest memories included traveling the world with his family building their Xyngular business, hunting the best buck, ranching & rodeo life, supporting his daughter’s activities, including teaching them how to ride and play basketball and hauling them many miles up & down the road to cutting shows. He was always so proud of their accomplishments.

Terry’s faith in God’s “perfect plan” was important to him as he witnessed to everyone he met through his actions and his words. He and Julie were in fact “re-baptized” in the Dismal River early in their marriage. He was always very warm and genuine; ‘never met a stranger’ and never had an enemy. He was generous with his abilities & talents, time, resources, compliments and friendship. He was a true cowboy, Godly family man, and his advice and opinions were sought after and highly respected by others.

He was preceded in death by his father Rusty, and Grandparents Ray and Margaret Dobbins, Frank and Eva Correll, and Father in law and Mother in law Bernard and Velda Goes.

Funeral Service will be held Saturday, September 26, 2020 at 2:00pm at McPherson County High School Tryon, NE with Rev. Jim Streicker, Bethel E-Free Church and Pastor Jon Parsons, Ringgold Free Methodist church officiating. Visitation and book signing will be from noon to 8:00pm with card reading and memory sharing from 6:00 -8:00pm on Friday, September 25 at Adams and Swanson Funeral Home North Platte, Ne. A Memorial has been established to support the children’s’ educational funding or a donation may be made for family’s choice to be determined at a later date.

The family has selected Prairie Friends and Flowers to handle the floral arrangements.