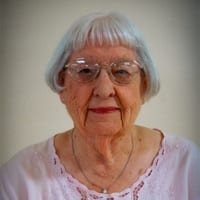 Vera Ursha Coleman was born on February 6, 1918, at Johnstown, Nebraska.  Her parents were Martha Ida Coleman and Clarence Monroe Coleman.  Vera better known as “Toots” moved with her mother to her grandfather Max Wendler’s Ranch at Rat Lake, when she was two years old.

Vera attended School District 175 in Cherry County and rode her horse, Old John, to school and back.  She and her mother moved to Ainsworth, where she attended high school, graduating in 1936.  It was during high school that she started dating Merrill Lee.  The Lee Ranch was 8-10 miles from the Wendler Ranch so during the summer breaks they became better acquainted, attending dances in the area towns of Brownlee, Ainsworth, Woodlake and Johnstown.  Following graduation from Ainsworth High School, she moved to Omaha and worked for a year.

Vera and Merrill Lee were married in the Ainsworth Methodist Church on August 19, 1937.  The first years of marriage, they lived with Merrill’s parents.  A house was moved to the Lee Ranch and it became their home. Two children blessed their marriage, James Roger, born in 1940, and Diane, born in 1944.

Toots was a long-time member of the Brownlee Woman’s Club, a charter member of the Nebraska Cowbelles, a member of the Valentine Presbyterian Church and Cherry County Hospital Auxiliary.  Three of her favorite pastimes were dancing, reading and “getting mail”.

Toots and Jim spent winters in Arizona from 1975-2002. They moved from the ranch to an apartment in Valentine in 1998.  Following Merrill’s death on August 17, 2010, Vera moved to Cherry Hills Estate.  In October 2018 Vera moved to Pine View Good Samaritan Center.

Services were held June 21, 2021, at the Valentine Presbyterian Church.  Burial was at the Mount Hope Cemetery in Valentine.

Sandoz Chapel of the Pines was in charge of service arrangements.