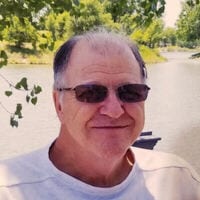 He grew up on a farm near Hershey and attended Hershey High School graduating with the class of 1966.

On March 26, 1968 he entered the United States Army, serving in Vietnam and was Honorably Discharged on February 26, 1970.

Verlyn worked as a Conductor for the Union Pacific Railroad for 29 years.

On September 28, 1991, Verlyn was united in marriage to Brenda Kramer at The First United Methodist Church.

He loved traveling, camping, driving his motor home, fishing, playing cards and marbles, listening to Brenda perform music, dancing and most of all spending time with family and friends.

Verlyn was preceded in death by his father, Wilbur “Shorty”; and Verlyn’s service dog, Winston.