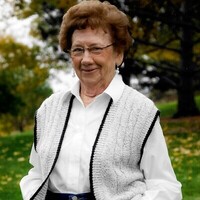 Wanda Lorraine (Harris) Nutter Mackley, a great Woman, Wife, Mother, Grandmother and Great-Grandmother.  Wanda, age 91 was born April 13, 1930, in Halsey, NE to Lester Harris and Bessie (Rodocker) Harris, and died at Pioneer Memorial Rest Home in Mullen on December 18, 2021.  She enjoyed growing up in the Sandhills in Halsey with her sister, Beulah and brother, Kenneth Dale, both of whom preceded her in death.  Her son, Troy and two infant grandsons also preceded her in death.

Wanda attended school in Halsey graduating in 1947.  She then attended Kearney State College one summer and taught at the Antelope Valley & Ewoldt country schools around Thedford from 1947 to 1950.   In her younger years Wanda worked for Bessie National Forest in Halsey.  Her family owned and operated the movie theater where she would sell popcorn to movie goers.  Other work experience included clerking for the Thedford Livestock Sale Barn and she also was an EMT for several years.  Later, she worked as a secretary for Judges Reynolds and Bigelow at the Thomas County Courthouse.  In 1979, Wanda attended beauty school and became a cosmetologist.  She owned her own business for 10 years.  A trip to grandma’s always included pancakes for breakfast and a haircut.  Wanda attended the United Church of Christ and St. Thomas Parish in Thedford.

Wanda met Russ Nutter on a blind date after her senior play in 1947.  They were married Sept 1, 1949, in Ainsworth, NE.  They lived on the Nutter Ranch east of Thedford until 1988, when they retired and moved to Thedford.  They were together 51 years before Russ passed away May 23, 2000, of cancer. To this union four children were born. Wanda later met Leonard Mackley, of Arnold, at the North Platte Senior Center Dance Club.  They were married June 3, 2006, and resided in Thedford until 2017 when they moved to North Platte.

Wanda committed much time and support to the American Legion Auxiliary Steidley-Kayton Unit 230 of Thedford.    Cooking was her forte and she enjoyed entertaining friends and family.  Some other pleasures in her life were watching her grandkids’ sporting events, vacationing with family, and attending dances at the North Platte Senior Center.

Family was a major focus in Wanda’s life and her constant involvement and concern for their well-being is something they admired and valued.  Her family will carry her love and lessons with them, passing them on for generations.   Her love will live on in the memories of her family:  daughter Connie (Ben) Moser of North Platte, NE, sons Mark (Marian) Nutter, of Thedford,  Brad (Anne) Nutter of Hickman, NE, daughter-in-law Linda Nutter of Thedford, NE, 13 grandchildren, 13 great-grandchildren and several nieces, and nephews.

In accordance with Wanda’s wishes, cremation was chosen and there will be no visitation.  A private family graveside memorial at Hillcrest Cemetery in Thedford will be held at a later date.